Baby sharks at a Birmingham aquarium will only consume food fed by hand say staff
Posted by AVN Staff at 8:13 PM No comments:


15-year-old Brentwood girl speaks out after surviving from shark bites
Posted by AVN Staff at 12:01 PM No comments:

This is amazing home video vacation-type footage. This guy in the water is either brave, in shock, or completely insane... 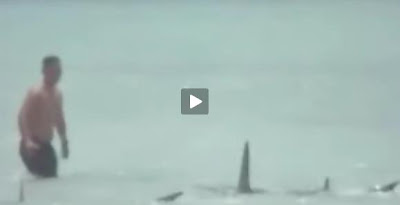 Feel free to post comments if you know the locale, type of shark, name of the guy in the water, etc.
Posted by AVN Staff at 8:37 AM No comments:


6 16 08 - A Brentwood teen suffered minor injuries during an encounter with a shark off the coast of South Carolina
Posted by AVN Staff at 5:08 PM No comments:


It soUNDs like a bad movie Lost at sea shark infested waters giant man-eating lizards But for a group of European scuba divers the drama on the high seas was all too real In London CBS s Charlie D Agata has the story amp lt It s SUPPOSED to be a scuba paradise But for a team of European divers the waters of Indonesia quickly became hell on earth It began when they were swept away by fierce riptides For 12 hours they drifted helplessly in choppy seas teeming with killer sharks until they dragged themselves ashore on this remote island and began scavenging for food aptn video - for cbs affiliates and o amp amp o use only ELENA NERALAIREN SWEDISH TOURIST 22- 26 WE FOUND SOME MUSSELS THAT S THE ONLY THING THERE IS NO COCONUT TREES THERE IS NO FRUITS AND NOTHING IN THE ISLAND bbc video - no international access But starvation wasn t their only worry The island was infested with blood-thirsty Komodo dragons like this ten feet long 350 pounds razor sharp teeth and a poisonous bite the carnivorous killers have a history of tearing into humans Divers said they had to pelt one of the predators with rocks and their weight belts to scare it away FINALLY 45 hours after vanishing they were spotted and rescued by local fisherman
Posted by AVN Staff at 3:14 AM No comments:

Fishermen Use Cooler To Stay Afloat in Shark-Infested Waters